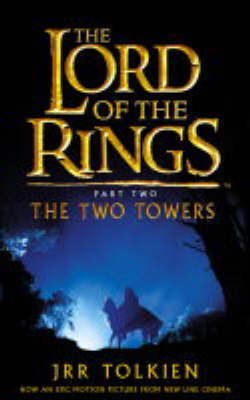 The Lord of the Rings Part Two: The Two Towers

The second part of Tolkien's epic masterpiece, "The Lord of the Rings", featuring a cover image from the film. Impossible to describe in a few words, J.R.R. Tolkien's great work of imaginative fiction has been labelled both a heroic romance and a classic fantasy fiction. By turns comic and homely, epic and diabolic, the narrative moves through countless changes of scene and character in an imaginary world convincing in its detail. Tolkien created a vast new mythology in an invented world which has proved timeless in its appeal. Reissued to celebrate the release of the major motion picture trilogy, these A-format paperbacks incorporate images from the films on the covers. This is the second installment, "The Two Towers", in which the Fellowship is sundered. While Aragorn, Legolas and Gimli attempt to rescue the hobbits, Merry and Pippin, Frodo and Sam must journey into Sauron's desolate land of Mordor unprotected and alone.

'The English-speaking world is divided into those who have read The Lord of the Rings and The Hobbit and those who are going to read them.' Sunday Times 'A story magnificently told, with every kind of colour and movement and greatness.' New Statesman 'Masterpiece? Oh yes, I've no doubt about that.' Evening Standard 'Extraordinarily imaginative, and wholly exciting' The Times 'The story itself is superb' Observer 'A most remarkable feat' Guardian 'Masterpiece? Oh yes' Evening Standard 'An astonishing imaginative tour de force' Daily Telegraph

J.R.R.Tolkien (1892-1973) was a distinguished academic, though he is best known for writing The Hobbit, The Lord of the Rings and The Silmarillion, plus other stories and essays. His books have been translated into over 30 languages and have sold many millions of copies worldwide.