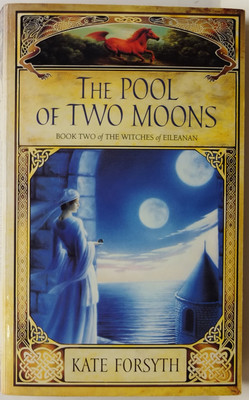 The Pool of Two Moons (Witches of Eileanan #2)

The eagerly awaited sequel to DRAGONCLAW POOL OF TWO MOONS Book Two of the Witches of Eileanan Author Kate Forsyth made a bit of a splash with the first volume of this series last year. Her first novel, Dragonclaw was shortlisted for the 1997 Aurealis Awards for Best Fantasy - putting her in the company of Sarah Douglass and Isobelle Carmody - and received rave reviews. Now the story of the Witches of Eileanan continues ...At the terrible Day of Reckoning witchcraft was outlawed in Eileanan; witches were killed and their great towers of learning destroyed. Behind the persecution is the beautiful and mysterious Banrigh. The Lodestar, the Inheritance of Adean wielded by the rulers of Eileanan, is lost. Jaspar, the Righ, sickens as he hears the Lodestar's song grow fainter and fainter. Not all the witches were killed on the Day of Reckoning, however. The wood witch Meghan leads the half-blackbird, half-man Bacaiche and the Scarred Warrior Iseult through the countryside to the safety of the Veiled Forest, where she hopes to meet up with Isabeau, her ward, whom she has entrusted to carry part of the precious Key of the Coven. Once in the forest they are visited by the magical Celestines, and Bacaiche reveals his true identity. There are also other, less welcome visitors: the Banrigh's Red Guards may be easily repelled at the forest's fringes, but not so the deadly mesmerdean. In the royal castle at Rhysmadill, Isabeau recovers from the rigours of her journey and falls into her role as serving-girl. There she observes the Righ's decline, and feels the sinister presence of the Banrigh's maid, Sani. Does Sani know that Isabeau has escaped from the clutches of the Awl? Most importantly, how is Isabeau to contact Meghan and join her piece of the Key with the others? As Eileanan's ancient enemies, the sea-dwelling Fairge, take control of parts of the coast, trade grinds to a halt. In the countryside life is hard, supplies not always what they were, and the once-loved faery creatures cruelly hunted down. In the far reaches of swamp-bound Arran, Margrit makes her own plans. As does her son, Iain, whom she has kept a virtual prisoner in the Tower of Mists. Why does Margrit chose to make an alliance with the dour Berthildes of neighbouring Tirsoilleir? Meanwhile Jorge the Blind Seer leads his group of tattered children to the rebels' camp deep in the mountains. The rebels plan to take the ancient city of Lucesere on Samhain Eve. If they do, and the Key can be joined, great magic can be invoked in their cause. At Lucesere is the remains of the witches' Tower of Two Moons and its magical pool. What secrets lie in the pool's depths? Can the Lodestar be freed and Eileanan live in peace once again?