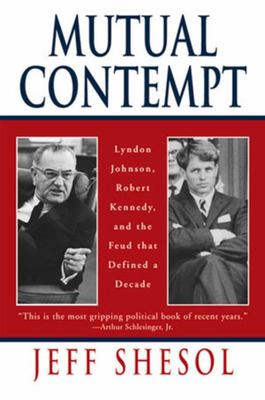 Mutual Contempt - Lyndon Johnson, Robert Kennedy and the Feud That Defined a Decade

After the death of John Kennedy, LBJ and RFK were the dominant political figures of the 1960s, each fighting for the spotlight, each struggling to emerge from the other's shadow. Their arguments echoed across the nation, as "Johnson men" and "Kennedy men" waged political turf battles and the press portrayed every disagreement as a claim on the legacy of the fallen JFK. By 1968, two men who were once allies had become bitter rivals for the presidency of the United States. Drawing on previously unexamined recordings and documents, as well as memoirs, biographies, and scores of personal interviews, Jeff Shesol weaves the threads of this story into a tight and gripping narrative that reflects the profound impact of this relationship on politics, civil rights, the war on poverty, and the war in Vietnam. Like a Greek tragedy played out on a nation's center stage, this book provides a prism through which to view two men, their times, and the nature of power.