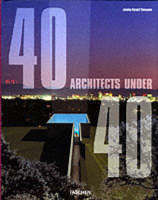 Who are the Norman Fosters, Richard Meiers and Tadao Andos of tomorrow? Who will be building our airports, museums, and homes in the 21st century? 40 Under 40 is Taschen's answer. Discover the next generation of designers who are already starting to shape the future of architecture for the new millennium, redefining the relationships between culture, environment, structure, and space. Taking inspiration from visions of the future and traces of the past, these are the people who are defining the aesthetics of tomorrow's architecture. This new and original book takes us on a tour around the world, highlighting the best young architects and their groundbreaking work. Some of the architects featured, such as Shigeru Ban of Japan and Ben van Berkel from Holland, have already gained critical acclaim for their work. The rest, such as Marc Barani and Aranda Pigem Vilalta, are waiting in the wings. 40 Under 40 is organized alphabetically by architect or firm, each entry featuring biographical and bibliographical information, as well as text highlighting the designers' most important works to date. With a wealth of photos and floor plans and a fresh, innovative layout, 40 Under 40 is both an essential reference book and exciting peek into the future face of architecture.